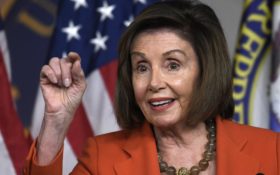 Despite the House impeachment inquiry, the White House and top aides to the California Democrat have been in regular communication on efforts to curb drug prices, a mutual objective. Prospects for legislation this year appear dim.

The official said that while Trump is not ideologically opposed to Medicare negotiating prices for medicines, Pelosi’s approach can’t be quickly retooled.

Her bill would levy steep taxes on drug makers who refuse to accept a Medicare price keyed to what’s paid in other economically advanced countries. The senior White House official pointed to the lack of Republican support for the Pelosi bill and said it is structured to essentially give Medicare the power to dictate prices.

The official spoke on the condition of anonymity to discuss ongoing deliberations.

Trump is instead backing a bipartisan bill from Sens. Charles Grassley, R-Iowa, and Ron Wyden, D-Ore. That legislation would for the first time limit what seniors have to pay out of their own pockets for medications. It would also require drug companies to pay rebates to Medicare if they hike prices beyond the inflation rate. Those ideas are also part of Pelosi’s more ambitious legislation.

But the Grassley-Wyden bill does not give Medicare negotiating power.

Aides to the House speaker have said that her bill would give Trump precisely what he had asked for as a presidential candidate when he broke with other Republicans to back negotiating authority for Medicare. Under the legislation that created Medicare’s prescription drug program, price negotiations are handled privately by insurers and their pharmacy benefit managers.

The White House official said the administration is working with Grassley and Wyden on improving their bill, by adding special provisions to address the escalating cost of insulin, which is used to treat diabetes, and by exploring a monthly limit on out-of-pocket costs for Medicare recipients.

A study published Monday found that more than half of seriously ill Medicare enrollees face financial hardships with medical bills, and prescription drug costs are the leading problem.