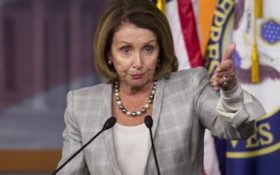 Heading into the critical 2018 midterm election, House Minority Leader Nancy Pelosi is caught up in the fight of her life.

After Pelosi put her job on the line and promised to deliver Democratic leadership a “blue wave” in the 2018 midterm, things are not going according to plan.

Friday morning, she woke up to some very bad news. Even liberal California, polls show, might just turn red in November.

Across the country, conservative candidates are closing gaps (or widening leads) because of Pelosi’s poor leadership.

And even in her backyard, California is just five points away from voting in a Republican governor.

That’s right. Far-left California — the stronghold of Pelosi and establishment Democrats — is on the brink of electing a Republican governor.

That news likely had Pelosi choking on her breakfast.

Newsome, 44 percent, is still clinging to a slim advantage over Cox, 39 percent. But the polls show Cox is rapidly winning over independent voters.

Less than 25 percent of California voters are registered Republicans.

The five percentage separation is something that can be overcome, say experts. Over 17 percent of voters remain undecided in the race.

Minority voters are being won over by the Republican candidate as well; this follows a recent trend that helped President Donald Trump win the White House in the 2016 election.

Cox has reportedly captured a similar percentage of Latino voters as his Democratic rival, which has surprised many political experts.