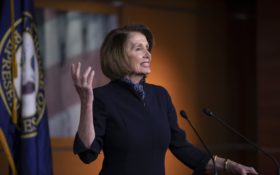 If you think Nancy Pelosi didn’t get the message when she nearly lost her spot as House speaker, think again.

Pelosi has paid close attention, and is now rallying Democrats behind her by focusing her 2019 attention on a core issue for liberal voters: Disarming law abiding citizens in the first 100 days of 2019.

On Monday, Pelosi declared that she plans to move “boldly and decisively” to push major new anti-gun laws through the Democrat-controlled House once the next Congress is sworn into office.

Her first target in the initial 100-days of 2019 will be passing universal background checks for every single gun sale that happens in the country.

“The new Democratic majority will act boldly and decisively to pass commonsense, life-saving background checks that are overwhelmingly supported by the American people,” Pelosi said in a statement.

The amount of bureaucratic red tape that will add will be mind-boggling, warn critics. It will be expensive… and Pelosi may even try to make background checks required for private transactions.

That would make criminals out of well-meaning gun owners who transfer the ownership of their legal guns even in their own family.

Pelosi “promised to support criminalizing the private transfer of firearms if Democrats were given control of the House,” the National Rifle Association warned in November.

Think granddad can hand-down his old shotgun to junior next hunting season? If Pelosi and friends have their way, that could mean prison time if granddad doesn’t conduct an expensive background check on his own family.

Additionally, no “universal” background check system would have stopped recent mass shootings, the NRA points out.

“Pelosi and her ilk will try to exploit all of the recent tragic shootings that have taken place in order to promote ‘universal’ background check while ignoring the fact that none of them would have been impacted by such a scheme,” the NRA pointed out. “The firearms in all of these horrific crimes were acquired through either the federally-mandated background check, or even more restrictive state systems.”

Critics have come out in force to oppose Pelosi’s nasty anti-gun plan.

“Universal background checks has always been a red herring. It’s something that sounds very commonsense and probably polls very well, but there’s not a single commercial gun transaction in America that doesn’t have a background check,” Rep. Richard Hudson, R-N.C., told POLITICO.

“People who are putting this forward, I think they have good intentions. They don’t want the wrong people to have guns. But the wrong people are not going to report gun sales. So you will need a registry to know where every gun is,” Hudson said.