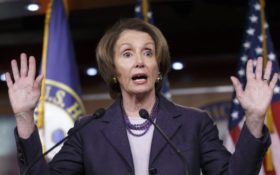 During Tuesday’s primary election President Donald Trump’s party came together and rallied around the White House’s agenda. On the otherside of the political aisle, however, things were far different — and it has House Minority Leader Nancy Pelosi very, very concerned.

A 28-year-old socialist ousted top House Democrat Joe Crowley in the president’s hometown Tuesday night, a stunning defeat that suddenly forced Democrats to confront their own internal divisions ahead of the promised “blue wave” in the November elections.

Crowley, the No. 4 House Democrat and until Tuesday considered a possible candidate to replace Pelosi someday as leader, becomes the first Democratic incumbent to fall this primary season. He was beaten by underfunded challenger Alexandria Ocasio-Cortez, a self-declared socialist who caught fire with the party’s alt-left voters.

Crowley’s loss echoed across the political world, sending the unmistakable message that divisions between the Democratic Party’s pragmatic and more liberal wings may be widening heading into the high-stakes November midterm elections. It also exposed a generational divide among Democrats still struggling with their identity in the Trump era.

Wow! Big Trump Hater Congressman Joe Crowley, who many expected was going to take Nancy Pelosi’s place, just LOST his primary election. In other words, he’s out! That is a big one that nobody saw happening. Perhaps he should have been nicer, and more respectful, to his President!

Indeed, Trump had reason to celebrate Tuesday night as all three of his endorsed candidates survived primary challenges.

Those included New York Rep. Dan Donovan, who defeated convicted felon Michael Grimm in New York City’s only Republican stronghold, and former Republican presidential nominee Mitt Romney, who has warmed to the president in the past two years.

Yet none of the day’s contests mattered more to Trump than the one in South Carolina.

The White House went all-in for the governor in recent days, dispatching the president and the vice president to the state in an effort to prevent a political debacle.

With the November general election a little more than four months away, more than half the states had selected their candidates after the day’s final votes were counted across South Carolina, New York, Oklahoma, Mississippi, Maryland, Colorado and Utah.

History suggests that Trump’s Republican Party, like the parties of virtually every first-term president dating back to Ronald Reagan in 1982, is facing a tough challenge this fall.

Yet Crowley’s loss suggests that Democrats must overcome intraparty divisions if they hope to take control of Congress and key governors’ offices nationwide.

Trump got more good news elsewhere in New York City as Grimm failed in his political comeback attempt at the hands of the Trump-backed incumbent Donovan.

Grimm had held the Staten Island seat until 2015, when he pleaded guilty to knowingly hiring illegal immigrants to work at his Manhattan restaurant and cooking the books to hide income and evade taxes.

More than 2,000 miles away in deep-red Utah, former Massachusetts Gov. Romney defeated little-known state Rep. Mike Kennedy, who questioned Romney’s conservative credentials and ability to work well with the president. Romney, too, was endorsed by Trump despite his aggressive criticism of the president before his election.

In a weekend op-ed published in The Salt Lake Tribune, Romney wrote that the Trump administration’s policies have exceeded his expectations, but he pledged to “continue to speak out when the president says or does something which is divisive, racist, sexist, anti-immigrant, dishonest or destructive to democratic institutions.”

Big and conclusive win by Mitt Romney. Congratulations! I look forward to working together – there is so much good to do. A great and loving family will be coming to D.C.

Not to be forgotten: races to determine gubernatorial candidates in Maryland, Colorado and Oklahoma.

Oklahoma voters also backed the medicinal use of marijuana.

But Crowley’s defeat overshadowed much of the day’s developments.

That loss, and perhaps this one, cemented the GOP’s sharp shift towards the anti-establishment fervor that fueled Trump’s election in 2016.