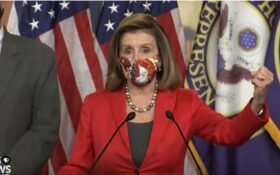 House Speaker Nancy Pelosi is raking in the cash — and critics say it’s because of insider trading she and her husband just made up to a stunning $30 million, she disclosed in late December.

Throw it on top of the pile.

Before her good luck, Pelosi was already one of the richest members of Congress. She and her husband have an estimated net worth between $40 to $252 million.

The lucrative December trades were based around Big Tech stocks — Google, Salesforce, Micron Technology, and Roblox — that Pelosi has failed to regulate. Insiders claim she has been “slow-walking” reforms on these technological behemoths.

At the same time, the powerful Democratic Party leader was also dismissing efforts to regulate stock trading by Congress.

“We’re a free-market economy,” Pelosi said at the time. Members of Congress “should be able to participate in that.”

She acknowledged that many congressional members often knowingly broke the rules — but offered no solutions.

“If people aren’t reporting [their trades], they should be,” she said.

Ethics watchdogs reacted to the statements with shock —

It's a ridiculous comment! She might as well have said "let them eat cake." Sure, it's a free-market economy. But your average schmuck doesn't get confidential briefings from government experts chock full of nonpublic information directly related to the price of stocks.???? https://t.co/2yRpEiJgO5

Since Pelosi joined Congress, she and her husband Paul Pelosi have become some of the best stock picking couples on plant Earth.

“The speaker and her husband may be among the world’s top stock pickers, with federal disclosure reports indicating they beat the S&P 500 index two years in a row, by 4.9% in 2019 and a shocking 14.3% in 2020,” Newsmax reported.