Nancy Pelosi is badly trapped... (no win!) - The Horn News 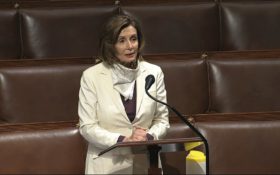 But she can’t do it without help from Republicans — and she’s not getting enough.

That leaves Pelosi in a no-win situation. She can either upset her core voters by letting Trump finish her term in 8 days, or launch a sure-to-fail impeachment process that will undermine President to-be Joe Biden’s call for unity.

Moderates like Sen. Joe Manchin, D-W.V., have warned that Pelosi doesn’t have close to enough the votes to succeed.

“I don’t see [enough votes] and I think the House should know that also. We’ve been trying to send that message over. They know the votes aren’t there,” Sen. Joe Manchin told Fox News’ Brett Baier on Monday.

“I think this is so ill-advised, for Joe Biden to be coming in, trying to heal the country, trying to be the president of all the people when we’re going to be so divided and fighting again,” he said.

“Let the judicial system do its job, Brett,” Manchin continued. “Let the investigations go on, let the evidence come forth … There’s no rush to do this impeachment now. We can do it later if they think it’s necessary.”

Sen. Roy Blunt, R-M.O., was far blunter about Pelosi’s impeachment effort than Manchin, saying it “clearly” was not going to succeed.

“My personal view is that the president touched the hot stove on Wednesday and is unlikely to touch it again,” Blunt told CBS News on Sunday. “I did, the day Senator Hawley announced he would be contesting those electoral votes, announced that I would not be. When Senator Cruz said he had a plan to put back in place a commission like the one formed in 1877, I said that wouldn’t happen.”

“I wasn’t interested then or now in spending a lot of time on things that can’t happen just like the impeachment of the president to remove him from office. That clearly is not going to happen between now and the last day he is in office,” Blunt said.

Before beginning impeachment efforts on Tuesday, Pelosi asked Vice President Mike Pence and Trump’s cabinet to invoke the 25th Amendment and remove the president from power, a request the vice president said he won’t entertain.

Pence and Trump met late Monday for the first time since the Capitol attack, and had a “good conversation” pledging to continue working for the remainder of their terms, said a senior administration official.

Trump faces a single charge — “incitement of insurrection” — in the impeachment resolution that the House will begin debating Wednesday, a week before President-elect Joe Biden’s scheduled inauguration on Jan. 20.