Nancy Pelosi HUMILIATED in her hometown (this stings!) - The Horn News 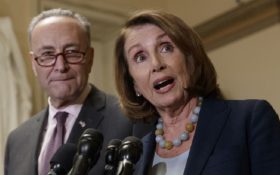 Everyone in politics has a pretty big ego, but Nancy Pelosi said something this week that took the cake.

Without a second of doubt, she announced on Tuesday that she will be the Speaker of the House again this January, no matter what. But the same day, she got a ton of bad news about her future – and it was delivered in the most humiliating fashion possible.

To make it sweeter, the hammer fell on her right in her hometown!

A poll shows that Nancy Pelosi is less popular than the Left’s biggest opponent: the National Rifle Association.

That must have stung – provided she has any feeling left in her face – because Pelosi considers gun owners public enemy number one.

When House Republicans pushed back against her gun-grabbing legislation last October, she called the GOP “a wholly-owned subsidiary of the National Rifle Association” – like that was the dirtiest insult she could pin on them.

No wonder Republicans still control the House! A 2016 NBC News/“Wall Street Journal” poll found that the NRA is more popular than Hillary Clinton, the Democratic Party, and even Republican Speaker of the House Paul Ryan.

For some reason, American citizens respect an organization trying to protect their constitutional rights more than political hacks trying to take them away.

The NRA is so popular that even with some Congressional Democrats side with it before Pelosi.

Senator Joe Manchin said the American people are right to worry that Nancy Pelosi would confiscate all their guns if she had her way.

“I am a protector of Second Amendment rights, and I understand these people’s fear,” the West Virginia Democrat said.

If that wasn’t enough, Pelosi’s heart sank even more when McGrew announced that the NRA isn’t her only hated enemy who beats her in the polls.

McGrew poured this ice water on Pelosi the same day that she told the Boston Globe that the Democrats “will win” in this fall’s midterm elections…I feel very confident.”

Pelosi told reporters it doesn’t matter what the polls say – because the Democrats can win through mind power!

When the reporter asked what would happen if her party lost, the 78-year-old proved that she’s living in fantasyland.

“We have made a decision to win…We are going to win,” she swore.

Well, Nancy, you aren’t the one who makes that decision; the American people do. And we’d rather keep our guns and our freedom – you can keep the “change.”

If that scares her, maybe she’d better stay in her PC San Francisco district, or one of the six properties she reported paying a mortgage on in federal tax documents.

Pelosi is living in a dreamland where she’s positive that Democrats will take the House this fall and, when they do, “I will run for speaker.”

That’s a sure way to make sure Democrats lose the midterms this November, McGrew told his viewers.

Pelosi promising to run for Speaker of the House next year “may not be good news for Democrats,” McGrew said. “Republicans use Pelosi as a cudgel in their ads to convince people not to vote for Democrats – and they’re not wrong.”

Mike Pence has started telling Republicans one of the reasons they have to vote this November is to block Pelosi from getting back into a leadership position.

“I was there the last time she was speaker. I’m telling you, you don’t want to see that happen again,” the vice president said. “That was when they got Obamacare.”

The idea of Nancy Pelosi being Speaker of the House is so toxic that even her fellow Democrats are running away – in her home state!

About a dozen other Democrats have backed away from her publicly – while others just try to run away from the question.

Of the 34 Democrats surveyed by The Mercury News in March, only two admitted they would vote to give the Speaker’s gavel back to Pelosi.

To crank up the humiliation, McGrew made the announcement on San Francisco’s NBC affiliate, KNTV.

Ryan is retiring this year. Maybe Pelosi should take a hint and retire, too.