House Minority Speaker Nancy Pelosi does not want this picture to be shared online – because it will lose her and her Democratic pals a ton of votes in November.

With her job on the line heading into the 2018 midterms, Pelosi wants voters to focus on her criticism of President Donald Trump… not pictures of that show Democrat’s true nature.

But this one photo slices through all the lies that liberal leadership spits out daily.

Two NFL stars are shown after refusing to stand for the national anthem before last Sunday’s game between the Denver Broncos and Arizona Cardinals.

But next to them is their security guard… a patriotic woman who is standing with her hand over her heart.

Meanwhile, this elderly security guard is working a job that pays approximately $32,000 per year.

She would have to work more than 250 years to earn what the lowest paid player in this picture makes in just one year.

Yet she stands respectfully with her hand over her heart… because she is still grateful to live in the greatest country in the world. 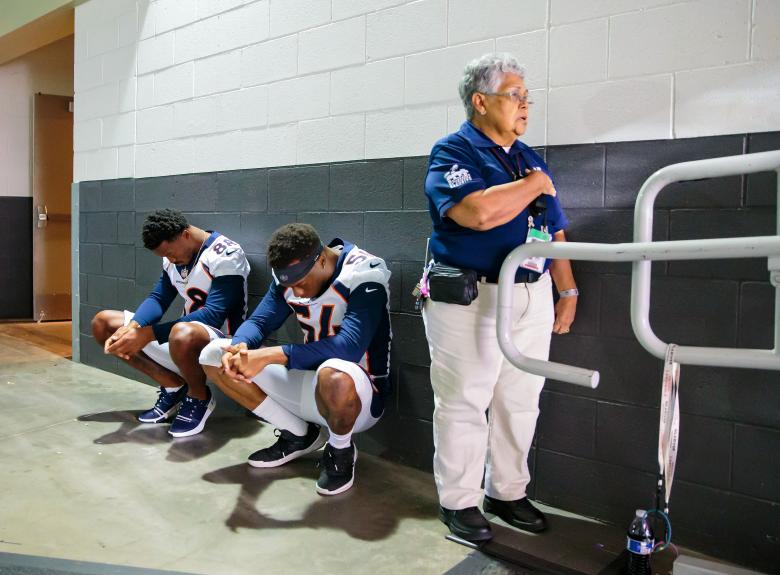 Overpaid millionaires disrespecting the American flag — while the hardworking hourly employees paid to protect them are thanking God they were born in such a great country — is something most Americans are sick and tired of seeing, according to polls.

It’s rallying more and more voters to Trump’s side.

Pelosi knows it’s a losing issue for liberals, and has tried to avoid the controversy. But when she was confronted at a CNN town hall about a league rule change requiring players to stand for the anthem this spring, Pelosi defended NFL players.

In other words, a wealthy California liberal — who owns multiple multi-million dollar homes — defends rich athletes instead of a hardworking, elderly security guard.

That’s a sentence that describes the Democratic Party perfectly.

And it’s going to cost Pelosi big time in November.