Nancy Pelosi FURIOUS over this picture - The Horn News 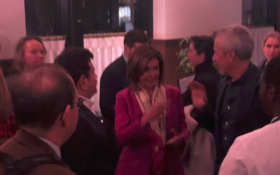 U.S. soldiers were being bombarded by Iranian ballistic missiles on Tuesday night, and House Speaker Nancy Pelosi told American voters on social media she was spending the night “closely monitoring the situation” with Democratic leadership.

A stunning picture reveals the truth, however.

Pelosi wasn’t monitoring the situation. She was socializing at a bar inside a swanky new Washington, D.C. restaurant while our troops were under attack.

When the attack began, Pelosi was meeting with House Democrats inside Capitol Hill to discuss the escalating tensions in Iran.

Vice President Mike Pence called Pelosi at 6:30 p.m. during the meeting to inform her of the ongoing attack. Pelosi returned his call at 6:34 p.m. and was briefed of the situation by Pence.

During a meeting tonight, House Speaker Pelosi was discussing the situation in Iran with members when she was handed a note with news of the attack on US forces in Iraq, lawmakers who attended the meeting said.

Closely monitoring the situation following bombings targeting U.S. troops in Iraq. We must ensure the safety of our servicemembers, including ending needless provocations from the Administration and demanding that Iran cease its violence. America & world cannot afford war.

In reality, Pelosi was — at almost that exact moment — at the bar inside Danny Meyer’s Maialino Mare, a fancy new restaurant that just opened a few blocks from Capitol Hill.

And we have photo proof.

At 7:14 p.m. a picture from Anna Spiegel, the food editor at Washingtonian Magazine, showed Pelosi smiling and partying inside the new restaurant —

If the social media timeline is accurate, Pelosi was leading a meeting with House Democrats when she was informed of the ongoing attack against U.S. forces.

She left that meeting to hit the bar while U.S. military personnel were still under attack.

Iran’s retaliation is another dangerous escalation that could draw the region deeper into turmoil, despite insistence by Washington and Tehran that neither side wants war. U.S. and Iraqi officials said there were no casualties among their forces.

Despite the heightened rhetoric, there were some indications that there might not be more immediate retaliation by either side.

It appeared Iran gave advance warning of the strikes. Iraqi Prime Minister Adel Abdul-Mahdi said he received notification from Iran just after midnight that its retaliation “was starting or would start soon” and would focus only on American positions. Finland and Lithuania’s militaries, which had personnel at one of the targeted bases, said they received information about an imminent attack and had time to move to shelters or leave the base.

The Iranian strikes on the bases marked the first time in recent years that Iran has directly attacked U.S. positions rather than through proxies in the region.

The Iranians fired a total of 15 missiles in Wednesday’s strike, two U.S. officials said. Ten hit the Ain al-Asad air base in Iraq’s western Anbar province and one targeted a base in Irbil in Iraq’s semi-autonomous Kurdish region. Four failed, said the officials, who were not authorized to speak publicly about a military operation.

“As we evaluate the situation and our response, we will take all necessary measures to protect and defend U.S. personnel, partners and allies in the region,” Jonathan Hoffman, an assistant to the U.S. defense secretary, said.

Ain al-Asad was first used by American forces after the 2003 U.S.-led invasion that toppled dictator Saddam Hussein, and it later was used by American troops amid the fight against the Islamic State group. It houses about 1,500 U.S. and coalition forces. Trump visited it in December 2018, making his first presidential visit to troops in the region. Vice President Mike Pence also has visited the base.