Nancy Pelosi DESTROYED by 7 word comeback (right to her face!) - The Horn News 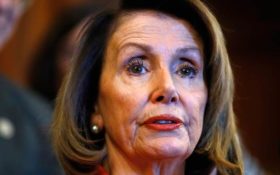 Attorney General William Barr had a comeback ready for House Speaker Nancy Pelosi — but she didn’t enjoy his attempt at “contempt humor.”

Pelosi threatened to hold Barr in contempt of Congress over the attorney general’s refusal to comply with congressional subpoenas regarding special counsel Robert Mueller’s report.

The setting was the National Peace Officers Memorial Day service Wednesday at the U.S. Capitol. Barr and Pelosi were in the crowd waiting for President Donald Trump to arrive. Pelosi had previously joked that Barr could be arrested and locked in a jail cell under the U.S. Capitol building.

“Let me just say that we do have a jail down in the basement of the Capitol,” she told an audience last week.

Barr called her bluff. At the service, he approached Pelosi, shook her hand, leaned over and gave her a devastating seven-word comeback to her previous threat.

Loud enough to be overheard, Barr asked: “Madam Speaker, did you bring your handcuffs?”

A smiling Pelosi let Barr know the House Sergeant at Arms was present at the ceremony, should an arrest be necessary, according to a person who witnessed the exchange and described it to The Associated Press.

Barr laughed in her face and walked away, this person said.

The exchange had social media buzzing —

"Madam Speaker, did you bring your handcuffs?"

Who won the exchange between Pelosi and Barr?

[Must Read] Nancy Pelosi trying to hide THIS bombshell from William Barr!?