Nancy Pelosi trying to hide THIS bombshell from William Barr!? - The Horn News 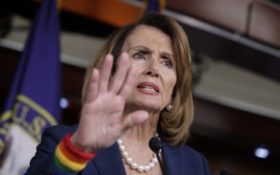 As the Democrats shift their anger from President Donald Trump to special counsel Robert Mueller, and now to Attorney General William Barr, ONE thing is clear.

The Democrats want Barr out. Now.

House Speaker Nancy Pelosi has set Democrats sights set on discrediting the attorney general. She is demanding his resignation. She even went so far as to call him a “criminal” on Thursday.

Why? Pelosi knows she may be in for some bad news if the Democrats can’t get Barr removed.

Could she be trying to cover-up Democrats (and Hillary Clinton’s) role in 2016 election meddling? If the Democrats want the White House back in 2020, they can’t let their foreign meddling in U.S. elections be investigated.

New revelations show that a Democratic National Committee (DNC) contractor worked with foreign intelligence agencies to dig up dirt on then-Republican candidate Trump during the 2016 election. On Thursday, the Ukranian embassy confirmed that their government worked with Hillary’s campaign.

For years, the Democrats have accused Trump of colluding with foreigners. Mueller said that’s not the case, and Barr has vowed to get the straight answers.

It turns out Hillary was doing exactly what she and the Democrats have accused Trump of doing. Alexandra Chalupa, the DNC operative that reportedly got former White House aide Paul Manafort fired, sought dirt from foreign intelligence agents in 2016 to help Hillary win the presidency.

In other words, the DNC was working with a hostile foreign power to help influence the 2016 election — and everyone on the Democratic side, including Pelosi, seems to know it.

Suddenly, the tables have turned. Trump is being exonerated for foreign collusion — and it’s Democratic operatives that are facing an investigation!

A full-scale bombshell like that would arrive at the worst possible time for the Democratic Party, which is already on life support.

Barr went on record when he said that he thought the Hillary email fiasco was worth looking into. He’s also implied there was illegal “spying” that happened in 2016. With the ever-evolving information that Ukraine meddled in the election, Democrats seem intent on avoiding a new investigation.

So their trying to discredit Barr and stop him… before it all comes crashing down on their heads.

In fact, their various testimonies and reactions to the Senate Judiciary Hearing on Wednesday may be proof that Democrats are starting to panic.

But is it the DNC that has lied to the American people?

We’ll know for sure soon.