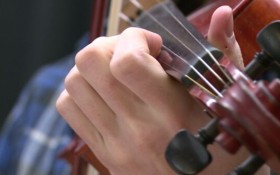 A federal judge has dismissed a nude protester’s claim that police violated his rights by arresting him while he played violin stark-naked outside the federal courthouse in Portland.

Matthew T. Mglej of Hillsboro, Oregon, sued the Portland police and the county last January, seeking $1.1 million in damages. The 26-year-old was arrested for indecent exposure in May 2014.

According to The Oregonian, the judge said Mglej’s nudity didn’t advance a specific message, so it wasn’t protected by either the First Amendment or the state constitution.

The judge allowed one allegation of excessive force against Multnomah County to proceed to trial. Mglej claimed jail deputies cut his wrists by jerking on his handcuffs.

County attorneys argued Mglej refused to follow directions once in jail and he didn’t complain of injuries at the time.