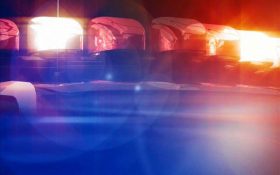 Authorities in Alabama say a man charged with burglary was naked when he was taken into custody.

Harris says his office got a call about 5:45 a.m. Monday about a man prowling around a house and possibly in a garage near Henagar.

The sheriff says the prowler was confronted by a resident and the two men began to struggle when the prowler fired a gun. A woman was grazed by the bullet but not seriously injured.

Harris says the suspect ran into the woods and was later found inside a home naked.

Online jail records do not list an attorney for Tucker.