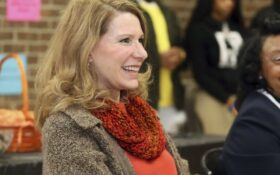 North Carolina’s first lady has apologized after a screenshot of her saying she “flipped off” supporters of President Donald Trump during a rally in the state was circulated on social media.

Nearly 60 people had attended the rally, which had a goal of encouraging Christians to vote, WRAL-TV reported. Michelle Morrow, an organizer for the event, told the news outlet that attendees were carrying a “Trump flag”, a “Black the Blue” flag as well as American flags.

“There was a pitiful family group waving those flags by the Capitol today. I flipped them off and told them to go home,” the screenshot shows Cooper as saying. “Was flipping off a brainwashed kid my finest hour? Probably not, but I can live with it.”

Cooper, who is married to Democratic Gov. Roy Cooper, apologized Thursday in an emailed statement from her spokesperson to The News & Observer.

“My personal Facebook comments and actions leading to it were inappropriate, and I am so sorry,” Cooper said. “I apologize to anyone I may have hurt, and I ask for forgiveness.”