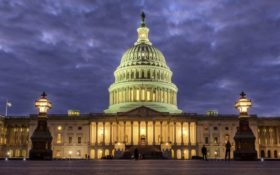 Dozens of web addresses implying U.S. senators were “for sale” have been quietly and mysteriously purchased online — and was originally thought to have been the handiwork of Russian trolls.

But the true culprits were revealed Monday: Democrats.

The Democratic Senatorial Campaign Committee acknowledged to that it had quietly purchased the addresses, which use a new internet suffix “forsale,” in March for at least 27 incumbent senators facing re-election this fall and in 2020, without telling any of the senators.

The addresses now controlled by the Democratic political group include the names of mostly Democrats but some prominent Republicans, too.

The group masked its role in the purchase to ensure its identity as the buyer remained anonymous. The current price for such addresses, with a privacy guard, is roughly $18 each.

“It’s a routine campaign practice to purchase URLs to stop bad actors from getting them, and if we eventually decided to develop a URL into a website then there would be a clear disclosure of who was operating it,” said Lauren Passalacqua, communications director at the DSCC.

The practice of buying politically-related web addresses to use them later online — or prevent rival campaigns from using them — has been a donefor decades, but it has taken on an new importance following the criminal charges brought against Russian agents accused of meddling in the 2016 U.S. presidential election.

U.S. intelligence chief Dan Coats cautioned earlier this month that the “warning lights are blinking red” and that “the digital infrastructure that serves this country is literally under attack.”

The mysterious “forsale” purchases set off alarms at the Capitol.

The Democratic Senatorial Campaign Committee said it was responsible for at least 27 of them targeting U.S. senators and didn’t provide further details.

Tim Groeling, an expert on political communication and new media at the University of California, Los Angeles, said the anonymity sought by the Democratic group was what troubled him. The identities of whoever registered the websites were purposefully masked. He said it’s common for campaigns to purchase permutations of candidate names defensively and to use offensively against political opponents.

“The lack of transparency is both concerning from a standpoint of the potential for other governments to do this type of thing and not be revealed, and our domestic politics,” Groeling said. “I’m a big fan of transparency. I think a lot of things can be fixed with sunlight.”