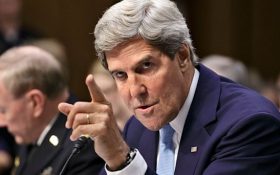 The mysterious Internet blackout for WikiLeaks controversial founder Julian Assange continued Wednesday, and Assange believes he knows who is behind it and why — Secretary of State John Kerry is putting international pressure on Ecuador to silence Assange.

Ecuador’s government acknowledged on Tuesday that it cut off Assange’s internet access at its embassy in London. The foreign ministry said that while it stands by its 2012 decision to grant Assange asylum based on legitimate concerns he faces political persecution, it respects other nations’ sovereignty and doesn’t interfere or support any candidate in foreign elections.

“The decision to make this information public is the exclusive responsibility of the WikiLeaks organization,” the foreign ministry said in a statement.

The recognition of the reprimand comes less than 24 hours after WikiLeaks tweeted that Ecuador had unexpectedly cut off Assange’s access to the Internet on Saturday after the publication of Clinton’s speeches to Wall Street investment bank Goldman Sachs.

Assange has been holed up at the modest embassy suite at No. 3 Hans Crescent for more than four years after the country granted him asylum, a position which — until now — hasn’t prevented him from continuing to play a pivotal role in exposing state secrets and backroom trade deals.

WikiLeaks said unspecified “contingency plans” were in place and the site and its Twitter feed appeared to be working as usual. On Wednesday it released another tranche of emails from Clinton campaign chairman John Podesta, suggesting that the group’s ability to publish has yet to be compromised.

The disclosure was the 12th installation in a series of leaks that have captured the workings of Clinton’s inner circle. Those leaks themselves are part of a wider cascade that have embarrassed the Democratic Party and Democratic presidential candidate Hillary Clinton.

The anti-secrecy organization also tweeted evidence they claim proves a conspiracy by the Clinton campaign to frame founder Assange for pedophilia and bribery.

#Assange: false accusation of pedophilia & taking US$1million from Russia.
What you need to know is here https://t.co/fjrjs0x2gd#defendWL

Assange fled to the Ecuadorean Embassy on June 19, 2012, after a drawn-out and ultimately unsuccessful legal battle to avoid being sent to Sweden, where he remains wanted over an allegation of rape. Ecuador granted him asylum, but British authorities have made clear they would arrest him if he tried to leave. London’s Metropolitan Police used to maintain a visible presence outside the building for years.

Assange isn’t likely to submit to the Internet ban quietly. Over the weekend WikiLeaks released three lines of code it described as “pre-commitments,” labeling them “John Kerry,” ”Ecuador,” and “FCO” — an apparent reference to Britain’s Foreign and Commonwealth Office. Pre-commitments are cryptographic functions that can be used to verify the integrity of material released subsequently.

Thomas White, a U.K.-based security researcher and transparency activist, saw the posts as a warning to the named parties that WikiLeaks had ammunition in reserve if Ecuadorean authorities “do not continue to offer him political asylum.”