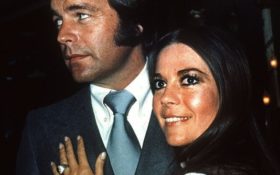 “Investigators want to speak with Wagner about the circumstances surrounding her death one night in 1981,” CBS News reported Thursday. Investigators revealed their suspicions in interviews for an upcoming CBS show, “Natalie Wood: Death in Dark Water.”

Wood was married to Wagner for nine years — from 1972 until her untimely death in 1981.

“As we’ve investigated the case over the last six years, I think he’s more of a person of interest now,” L.A. County Sheriff’s Department Lieutenant John Corina told CBS. “I mean, we know now that he was the last person to be with Natalie before she disappeared.”

According to The New York Daily News, “The 43-year-old drowned off the coast of Catalina Island, Calif., in November 1981 after she went missing from her family’s yacht. Captain Dennis Davern and Wagner’s friend, actor Christopher Walken, were also aboard that fateful evening.”

Wood’s death was initially ruled an accident. However, when the case was reopened in 2011 and a death certificate was issued for Wood, the cause was listed as “drowning and other undetermined factors.”

“I’ve said everything there is to say,” Wagner told the Daily News when reached for comment on the development.