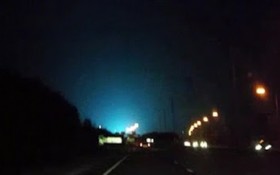 Scientists say a meteor was the cause of a bright flash of light reported by people across Scotland and northern England.

Police Scotland said the force began receiving calls about 6:55 p.m. Monday, with people reporting a loud bang, a sudden blue, green or white light or a fireball in the sky.

“I thought it was a plane coming down at first, but it was moving too fast,” he said.

The U.K. weather forecasting service the Met Office said Tuesday the incident wasn’t weather-related and the U.K. defense ministry wouldn’t comment on whether the flash was linked to military activity in the area.

Steve Owens, manager of the Glasgow Science Centre planetarium, said the likely culprit was a chunk of space rock — “about the size of a tennis ball or maybe even a watermelon” — that was burning up in the atmosphere.