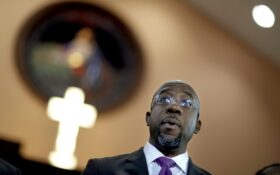 One of the Democrats who could be the tie-breaking vote in the U.S. Senate thinks Christians should be defenseless if an armed gunman starts shooting up their church.

Raphael Warnock, the Democrat running against Republican incumbent Kelly Loeffler in Georgia’s run-off elections next month, even laughed at Christians who would defend themselves with guns against the increasing rash of church shootings.

You can hear those words straight from Warnock’s mouth, thanks to a video obtained by the National Rifle Association.

Warnock came out against protecting Christian churches from the pulpit of his own Atlanta church — and the video shows the reverend attack the state’s 2014 Safe Carry Protection Act with both barrels blazing.

The Safe Carry Protection Act allows legally licensed gun owners to bring a gun to church, so long as the church permits — but Warnock and the whole congregation took turns laughing at the idea.

“Somebody decided that they had a bright idea to pass a piece of legislation that will allow for guns and concealed weapons to be carried in churches,” Warnock said.

First Warnock goes after our veterans, now our Second Amendment.

In February 2014 he called the bill, which gives church members a fighting chance to defend themselves and fellow church-goers from mass shooters, “the dumbest legislation you can ever imagine.” He said it would only arm” all the crazy people … Imagine all them people with guns.”

In October 2012, a mentally ill ex-parishioner opened fire at the church founded by televangelist Creflo Dollar in College Park, Georgia. The shooting killed the man who led the prayer service. Defenseless, he was shot 12 times.

Just a few months prior, two people were shot and killed, and two more were wounded, outside a church in DeKalb County.

Last November, police busted a 16-year-old white girl who planned to attack and kill people at Gainesville’s Bethel African Methodist Episcopal Church “based on the racial demographics of church members,” according to Gainesville police.

Based on Warnock’s words, he would like them to be sitting ducks — and opposing the 2014 bill is just part of Warnock’s lifelong gun control activism.

He and failed 2020 Democratic presidential hopeful Michael Bloomberg teamed up a year earlier to crack down on gun shows as part of Bloomberg’s group, Mayors Against Illegal Guns. Warnock even hosted a gun “buy-back.”

Warnock made many of these anti-gun statements at Atlanta’s Ebeneezer Baptist Church, the same church pastored by Martin Luther King Jr. But his view of guns couldn’t be more different than MLK’s.

King, the famed civil rights leader, received constant death threats … and he had guns all over his home for protection.

One visitor almost sat on a gun inside King’s home, and a white civil rights leader said King’s home had as many firearms as “an arsenal.” Even after King refused to carry a handgun himself, he surrounded himself with armed guards, who joked that they carried “nonviolent pistols.”

But his present-day successor in the pulpit, Warnock, claimed that the 2014 bill to let church members voluntarily carry guns is just “the gun lobby foisting their agenda on churches,” and “a tragic violation of church and state.”

This summer protesters tried to burn down Washington, D.C.’s National Cathedral, but Democrats and leaders of the ultra-liberal Episcopal Church only protested when Donald Trump stood in front of it with a Bible.

The Democratic Party took “God” out of its political platform in 2012 and booed when embarrassed party figures tried to force Him back in.

Jesus told the 12 Disciples, “If the world hates you, keep in mind that it hated me first.” But who would have thought the hatred would come from the pulpit?

State leaders say if Warnock wins his election, he plans to cancel the Second Amendment from coast to coast.

“We are trying to educate our membership to the possibility of considerable gun control in our future if we allow both our senators to lose,” said Jerry Henry, executive director of Georgia Carry. “Our national gun rights are at stake, in my opinion.” Every single one of the 1.8 million people who bought a gun since the presidential election last month has a stake in the Georgia run-off election.

Every single one of the 1.8 million people who bought a gun since the presidential election last month has a stake in the Georgia run-off election.