[Must See] Lunatic sets fire to ex-girlfriend's house, then dances on the roof! - The Horn News 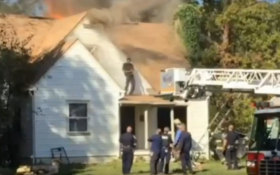 A crazed ex-boyfriend went on a wild rampage of revenge Monday in Indianapolis, according to police.

Russ retreated and barricaded himself in the home, and according to the report police then noticed smoke and flames coming from the house. That’s when Russ is alleged to have emerged on the roof and dance while the house burned under him.

Police resorted to using rubber bullets and eventually a taser to subdue dancing man, and used an aerial ladder to take him into custody.

You can see the whole thing here: