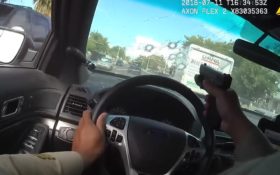 The Vegas Metro Police Department released bodycam footage from a police chase last week — and the footage is so insane, it may look like a Hollywood action movie.

Two suspects allegedly fled a traffic stop and officers had attempted to stop their car, but they did not comply.

Officers began following the suspects and even exchanged gunfire — the suspects eventually crashed into a wall leaving one suspect injured, and another dead.

On July 11, officers responded to a call for a shooting at a car wash. A man was reportedly shot multiple times and the suspect had fled the scene in a large Ford Expedition, that was driven by another man.

When officers were able to locate a vehicle matching that description, the driver took off and a wild chase began.

You can see the intense footage here —

As seen in the video, the suspects were shooting at officers several times and Officer William Umana returned fire through his windshield and his open car window.

According to Fox News, “The suspects traded more than 60 shots with police during the harrowing pursuit.”

Fidel Miranda, 23, was shot by police which ended the length chase. He was handcuffed while medical attention was called, but later died at the scene.

Officers were able to arrest Rene Nunez, 30, on charges of murder and attempted murder of a police officer.

Las Vegas Metro police Assistant Sheriff Tim Kelly said, The shooting “paints a picture of the dangers these officers dealt with that day.”

“In my opinion, they show a level of bravery, professionalism, heroics, that we come to expect of our officers,” Kelly said. “The officer could have backed off but he didn’t, he stuck with that individual knowing what type of individual he was dealing with.”

Each day, our officers put their lives on the line for others — and these officers went way above and beyond their duties.