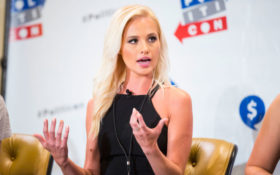 Fox News contributor Tomi Lahren explained on Sunday that Democrats despise President Donald Trump so much that they are clueless to the fact that he is helping the Americans they claim to support.

Appearing on “The Next Revolution,” she explained that Senator Bernie Sanders and congressional candidate Alexandria Ocasio-Cortez use the same talking points frequently, and that their arguments against Trump are baseless.

“They don’t want to talk about all the great things this president is doing for everyday Americans, so they have to talk about Michael Cohen day in and day out,” Lahren explained.

She added, “The average American does not care about that. All the Democrats have is Trump derangement syndrome, Russia and identity politics.”

Democrats claim to want to help the middle class, the poor, and to give everyone fair incomes.

Ironically, the same people that Democrats want to support, Trump is already helping.

Former Utah Congressman Jason Chaffetz added to Lahren’s argument that Trump’s “disruptive” approach is working — and Democrats are hating it.

The mainstream media fails to report on Trump’s accomplishments, but those who do not suffer from the Trump derangement syndrome understand the news that actually impacts our lives — the higher incomes for Americans and a steady economy.