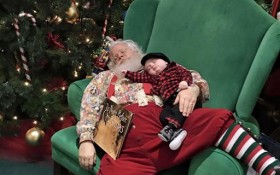 When Indiana man Donnie Walters took son Zeke to have his picture taken with Santa Claus, the 6-month-old boy couldn’t stay awake while they waited in line.

So Santa obliged Walters and posed asleep with the snoozing child resting on his belly.

Walters posted the photos of the sleeping pair on Facebook. The photos taken Nov. 25 at Evansville’s Eastland Mall and posted the following day have been liked 371,000 times and shared more than 195,000.

Walters tells USA Today that “everyone has been very kind.” He says most comments referred to how much the pictures have brightened people’s day.