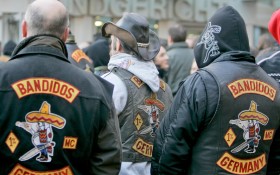 177 people were arrested after the May shootout involving biker gangs and police in Waco, Texas.

Nine people died and 20 were injured during the shooting, which authorities say arose from an apparent confrontation between the Bandidos and the Cossacks motorcycle clubs.

Now, CNN has released wild footage of the gun battle and aftermath. Warning, some of this material is graphic —