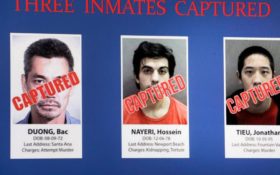 In an age when everything else is captured for public consumption on a smartphone, why not your own jailbreak?

Inmates who broke out of the maximum-security wing of a Southern California jail last year did just that with a smuggled cellphone and through an attorney released it to the public Wednesday, complete with glossy voiceover from one of the convicts.

It shows the kind of images usually relegated to movies like “The Shawshank Redemption,” with the three inmates shimmying into a vent and crawling through plumbing shafts.

It was provided to The Associated Press on Wednesday by an attorney for escapee Adam Hossein Nayeri.

The crisply edited video has a pop-music soundtrack and includes TV news clips about the escape and subsequent manhunt. It also contains voice-overs by Nayeri, recorded after their capture, giving his version of events, praising the cab driver the trio kidnapped and railing against the legal system.

One clip shows the inside of the maximum-security dorm room, known as Module F, at the jail in Santa Ana. How the inmates got the cellphones and were able to record in jail is not clear.

“You know, a lot of people like to credit us with some Houdini escape act all in eight minutes flat. It’s an interesting myth,” Nayeri says in voiceover to the video. “In reality we did leave that mod after count. Not the one they’re claiming though. I left that module at least eight hours earlier the night before.”

Inmates in the cramped dorm seem to know Nayeri is recording, but do not react, except for fellow escapee Bac Duong, who flashes a grin.

The video then shows the escape.

Nayeri carefully lifts a sawed-off bunk bed leg, exposing a previously cut metal screen on a wall. The screen is set aside as he disappears into a vent.

The trio crawls through plumbing shafts within the walls. At one point Nayeri stops and gives a thumbs-up. Jonathan Tieu squints as the light of the cellphone is shined on his face.

The inmates eventually reach the roof of the Orange County Jail.

The video does not show how the inmates got to the ground. Previous reports said they rappelled down using bed linens. On the video, Nayeri says they had industrial rope, a toolbox, a duffel bag and new clothes.

The next clips show the men taking turns posing at the corner of Haight-Ashbury in San Francisco. There are scenes from inside a van where they were sleeping.

A marijuana pipe is flashed. They hold up a bottle of Jack Daniels.

The men led authorities on a weeklong manhunt before they were recaptured.

The video does not show their recapture. Instead, Nayeri narrates the final two minutes of the edited video.

“We scared a lot of people and caused a lot of anxiety and fear and at the end of the day I can’t say I feel good about that. I can’t.”

In another section, Nayeri refers to Long Ma, the taxi driver they are charged with kidnapping, and who drove them north.

“This man is truly a hero,” Nayeri says. “He just radiated this calm fatherly presence.”

Photos show Ma with Tieu on a beach, appearing to pose for the camera.

Nayeri’s attorney, Salvatore Ciulla, did not respond to questions Wednesday about why he was releasing the video, when the voiceover was recorded and who edited the recordings.

Lt. Lane Lagaret, an Orange County Sheriff’s Department spokesman, has said the department wouldn’t comment on a video that “seeks to make light of criminal actions.”

The Orange County district attorney’s office said it would be inappropriate to comment on the video because the case is in litigation.

Stan Goldman, a criminal law professor at Loyola Law School, said legal questions could be raised as to whether the inmates could sell the footage or the rights to a film under California’s so-called “Son of Sam” law, which allows victims to sue if those convicted of serious crimes profit from their criminal acts, he said.