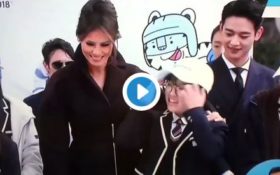 A video of first lady Melania Trump smiling at South Korean girls who had burst into screaming when they saw a member of a Korean pop boy band was shared widely on social media on Tuesday.

Across the ocean, it seems America’s allies are in love with our first lady.

The video showed Trump at ease with South Korean teenagers in school uniforms at an event where the first lady gave a speech on the importance of giving girls equal access to sports.

When the girls noticed Choi Min-ho, a member of the pop band Shinee, standing next to Trump on a surprise visit, they started to scream and clap, while the first lady watched them with a wide smile.

South Korean Twitter users praised the first lady’s interaction with the girls and the K-pop star, especially her long-lasting smile.

“She smiles a lot, speaks well and is so kind to the teenagers,” said one Korean Twitter user.

“I saw her smiling like that for the first time,” another said.

What are your thoughts on Melania Trump’s job as first lady?

How do you grade First Lady Melania Trump?