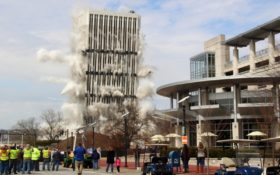 The tallest building in Kentucky’s capital city came crashing down in a controlled implosion Sunday, delighting thousands of onlookers who quickly scurried away to avoid the dust cloud that billowed overhead.

Republican Gov. Matt Bevin did not push the ceremonial plunger to start the demolition. Instead, he auctioned off that right on eBay, with all proceeds going to benefit a charity started by his wife. The #WeAreKY Foundation supports the state’s foster children. It has no paid staff, and the Executive Branch Ethics Commission said it is not a conflict for Bevin to raise money for charity this way.

You can watch the demolition here —

“It’s amazing that even as we are here to see a building come down, the dollars that are being generated in some measure from this are helping to build families up,” Bevin told the crowd shortly before the demolition.

The winning bid of $15,000 came from a Shelbyville resident, A.J. Stivers, who owns a company that provides on-site vision and hearing exams at schools across Kentucky.