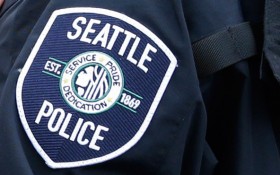 A video just released by the Seattle Police Department offers a glimpse of the kind of dangerous position the police put themselves in every day to make sure we’re safe.

The video shows a dramatic police chase from December 6th that involves the suspect firing at officers and weaving through the streets of Seattle while police officers doggedly pursue him. Finally cornered, the suspect attempts to charge police with his car. Officers respond by unleashing lethal force on the suspect.

Warning: This video is loud.