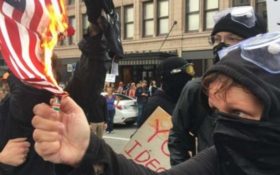 The Republican Party released a new video on Tuesday afternoon that has been been going viral on social media.

The new advertisement for the GOP touches on the hatred and hostility that is shown towards President Donald Trump, his staffers, and his supporters by the so-called “alt-left” — outspoken social justice warriors willing to attack and beat anyone that disagrees with them.

The minute-long video is titled, “The Left in 2018: Unhinged,” and features distubing footage of the Left’s violent rhetoric towards Republicans — and only touches the surface of their violent tendencies.

The video begins with a clip featuring comedian Kathy Griffin holding a severed Trump head. It shows footage from a limousine that was burned by “alt-left” Antifa members on Trump’s inauguration day.

Senator Maxine Water recently made waves after calling for violence against Trump and his administration, and a clip from her speech was featured in the ad.

“If you see anybody from that Cabinet in a restaurant, in a department store, at a gasoline station, you get out and you create a crowd and you push back on them,” Waters yelled.

Remember that time comedian Bill Maher said he wanted a recession in America just to get rid of Trump? Yup, that clip is part of the montage, too.

And that unforgettable moment when singer Madonna threatened to blow up the White House while speaking at the Women’s March in 2017 is featured as well.

The hatred, the violence, the threats made by Democrats in the last two years have gotten more alarming every day.

Senator Rand Paul was attacked by a supporter of Senator Bernie Sanders while at his own home.

Rep. Steve Scales was shot at a baseball game last year by a derange Leftist.

This alarmingly violent rhetoric is dividing our country, and it’s going to get someone killed.