[Must See] GOP Senator GOES OFF on Dems - The Horn News 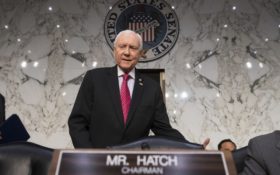 A debate between two senators over whether Republican tax cuts are aimed at helping the rich escalated into raised voices, interruptions, a banging gavel and the use of a decidedly un-senatorial noun.

“I’m telling you, this bull crap that you guys throw out here really gets old after a while,” Sen. Orrin Hatch, R-Utah, the oldest and longest-serving Senate Republican, said to a Democratic colleague.

The dispute flared Thursday night as Republicans pushed a $1.5 trillion tax cut for businesses and individuals through the Senate Finance Committee over Democrats’ objections. Liberal sparkplug Sen. Sherrod Brown, D-Ohio, a potential 2020 presidential candidate, said everyone knows Republicans aim to help the wealthy because “it’s in their DNA.”

Hatch, 83, a senator since 1977 and the committee chairman, decided he’d had enough.

“I come from the poor people, and I’ve been working my whole stinking career for people who don’t have a chance,” said Hatch, looking down the committee’s U-shaped table at Brown. “And I really resent anybody saying I’m just doing this for the rich.”

Hatch is generally soft-spoken and has a history of working with Democrats, and his display of emotion was unusual. He has not said if he will seek re-election next fall as his latest term expires.

As Brown tried interjecting and the decibel level rose, Hatch told him, “I’m not through,” and said he gets “sick and tired” of that argument.

“I come from the lower middle class originally, we didn’t have anything,” Hatch said. “So don’t spew that stuff on me. I get a little tired of that crap.”

Republicans have sold their tax package in part as a way to help the middle class.