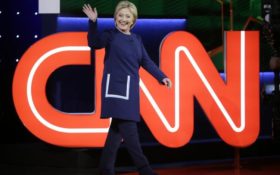 The network cuts the feed when a victim of Obamacare begins to tell her story in support of the president.

Critics say this is a common tactic for the network, which has been previously accused by the president and his supporters of being “very fake news.”

For years, conservative voters have complained that the network intentionally spins the news to help feed a liberal narrative, and tries to cover up dissenting view points.

In terms of the healthcare debate, for example, critics have cited the fact that CNN’s lead story on the new GOP-backed healthcare reform Tuesday failed to mention the $337 billion the plan would reduce from the deficit.

The controversial GOP legislation would offer consumer tax credits to assist in buying health coverage. Additionally, it would expand health savings accounts, phase out an expansion of Medicaid and cap that program for the future, end some requirements for health plans under Barack Obama’s disasterous law, and scrap a number of taxes and fees.

Supporters point to the fact that the GOP bill reduces federal deficits by $337 billion over a decade, and begins to bring down insurance premiums by around 10 percent starting in 2020.