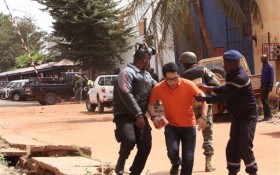 Malian national television reported that no more hostages were being held at a luxury hotel after a day-long siege by Islamic militants.

National broadcaster ORTM, citing security officials, said 18 bodies already had been at the hotel and that no more hostages were being held. A source with Mali’s U.N. mission said at least 12 bodies had been recovered from the hotel. The source spoke on condition of anonymity because he was not authorized to speak to the media.

It was not immediately clear whether attackers were still alive inside the hotel.

An extremist group that two years ago split from al-Qaida’s North Africa branch claimed responsibility for the attack on the Radisson Blu hotel in Bamako.

Col. Mark R. Cheadle, a spokesman for the U.S. Africa Command, says the U.S. military hasn’t received any other requests for help responding to the attack, but that the United States will continue assisting the French with intelligence and surveillance in Mali. 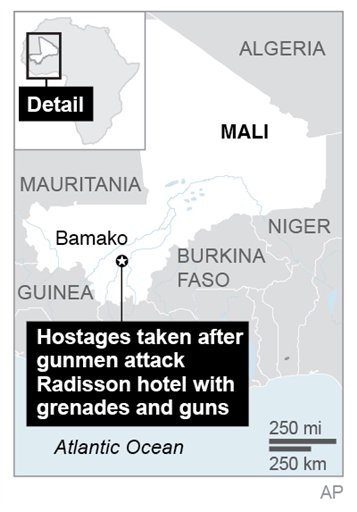 A spokesman for the service who was not authorized to be publicly named said the forces are permanently based in Bamako, primarily to secure the French Embassy.

He said they are currently “playing a supporting role” alongside local security forces.

U.S. State Dept. spokesman John Kirby says Americans “might be present at the hotel,” and that the U.S. Embassy in Bamako is working to verify this.

Malian troops reacted quickly to the attack. As people ran for their lives near the hotel along a dirt road, the soldiers in full combat gear pointed the way to safety. Within hours, local TV images showed heavily armed troops in what appeared to be a lobby area.

Malian state TV reported that 80 people in the hotel when the assault were initially freed.

Traore said at least one guest earlier reported that the attackers instructed him to recite verses from the Quran before he was allowed to leave the hotel.

It was not immediately clear which Muslim extremist groups might be behind the attack, which unfolded one week after the attacks on Paris that killed 129 people. A handful of jihadi groups seized the northern half of Mali in 2012 and were ousted from cities and towns by a French military intervention in early 2013.

Even after the French-led military attack that forced back the extremists from northern towns and cities, however, the north remains insecure and militant attacks have extended farther south this year, including the capital. In March masked gunmen shot up a restaurant in Bamako that is popular with foreigners, killing five people.

About 1,000 French troops remain in the country. The Netherlands also has troops working with the UN mission in Mali. According to the Dutch defense ministry, some 450 Dutch military personnel are taking part in the mission along with four Apache and three Chinook helicopters. Most of the Dutch force is based in Gao, but there are a few officers at the U.N. mission headquarters in Bamako.