Muslim refugees converting to Christianity in droves - The Horn News 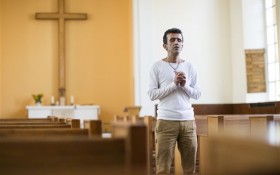 Big waves always start small. In Germany, Muslim migrants fleeing the war-torn Middle East are getting their first taste of religious freedom and are converting to Christianity by the hundreds. In one small  church in Berlin, the congregation has swelled from 150 to more than 600 parishioners in just two years. And the converts are bringing more and more of their family members and friends over to Christianity.

“Yes,” Zonoobi fervently replies. Spreading his hands in blessing, Martens then baptizes the man “in the name of the Father, the Son and the Holy Ghost.”

Mohammed is now Martin — a Christian.

Zonoobi, a carpenter from the Iranian city of Shiraz, arrived in Germany with his wife and two children five months ago. He is one of hundreds of mostly Iranian and Afghan asylum seekers who have converted to Christianity at the evangelical Trinity Church in a leafy Berlin neighborhood.

They do so, knowing they would face persecution if sent home.

Pastor Martens said. “I am inviting them to join us because I know that whoever comes here will not be left unchanged.”

In Afghanistan and Iran, conversion to Christianity by a Muslim could be punished by death or imprisonment. Several candidates for baptism at Martens’ church would not give their names out of fear of repercussions for their families back home.

As other churches across Germany struggle with dwindling numbers of believers, Martens has seen his congregation swell, with a seemingly unending flow of new refugees finding the way to his church.

Other Christian communities across Germany, among them Lutheran churches in Hannover and the Rhineland, have also reported growing numbers of Iranians converting to Christendom. There are no exact numbers on how many Muslims have converted in Germany in recent years — and they are a tiny minority compared to the country’s overall 4 million Muslims. But at least for Berlin, Martens describes the number of conversions as nothing short of a “miracle.” And he says he has at least another 80 people — mostly refugees from Iran and a few Afghans — waiting to be baptized.

Zonoobi, who dressed all in white for his baptism on Sunday, said he had attended secret religious services in Iran ever since friends introduced him to the Bible at age 18. He decided to flee to Germany after several Christian friends were arrested for practicing their religion.

For Zonoobi and his wife Afsaneh — who since her baptism goes by the name of Katarina — the christening marks a new beginning.

“Now we are free and can be ourselves,” she said. “Most important, I am so happy that our children will have a good future here and can get a good education in Germany.”