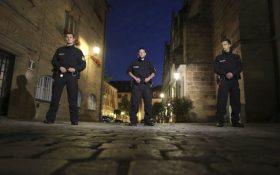 Islamic terrorism is on the rise across Europe, and critics say German Chancelor Angela Merkel’s mishandling of the refugee crisis is largely to blame.

This weekend, innocent people again paid for her mistakes with their blood.

A Muslim asylum-seeker from Syria blew himself up and wounded 15 people outside an open-air music festival in southern Germany, authorities said Monday. It was the fourth attack to shake Germany in a week – three of them carried out by recent migrants.

The 27-year-old terrorist, whom authorities have not identified, set off a backpack laden with explosives and sharp bits of metal outside a wine bar Sunday night after being refused entry to the nearby festival in the southern town of Ansbach because he didn’t have a ticket.

Roman Fertinger, the deputy police chief in nearby Nuremberg, said there likely would have been more casualties if the man had managed to enter the concert venue.

Four of the 15 victims suffered serious injuries in the blast.

Bavaria’s top security official said a video has been found on the bomber’s phone showing him pledging allegiance to the leader of the Islamic State group.

Herrmann said the man’s request for asylum was rejected a year ago, and a spokesman for Germany’s interior ministry said he had received two deportation notices.

Tobias Plate said the man was most recently told on July 13 that he would be deported to Bulgaria, where he submitted his first asylum request.

Plate told reporters that the first deportation notice was issued on Dec. 22, 2014, but it wasn’t clear why he hadn’t been deported then. Asylum-seekers are routinely deported back to the first country where they registered if they don’t follow proper procedures, even if they’re considered to have a legitimate claim for asylum.

The unnamed man had repeatedly received psychiatric treatment, including twice for attempted suicide, authorities said, and had been known to police for drug possession.

Authorities on Monday morning raided the asylum shelter where he lived in the suburbs of Ansbach and searched his room.

A team of 30 investigators was interviewing the man’s acquaintances and examining evidence collected from his home.

Asked whether the bomber might have links to the Islamic State group, Herrmann said that couldn’t be ruled out, though there was no concrete evidence yet.

Authorities said they were alerted to the explosion in Ansbach’s city’s center shortly after 10 p.m.

Police said the Syrian blew himself up in the outside seating area of a wine bar near the open-air concert.

They said in a statement that security staff noticed the man with the backpack near the entrance of the concert site around 9:45 p.m.

Police spokeswoman Elke Schoenwald said he was refused entry to the concert because he didn’t have a ticket. He then sat down on a chair outside the nearby restaurant. According to witness accounts he briefly leaned forward at 10:10 p.m. and then triggered the explosion.

About 2,500 people were attending the three-day open-air concert was underway. It was shut down as a precaution after the explosion.

The explosion came as Germany, and the southern state of Bavaria in particular, have been on edge.

Earlier Sunday, a Syrian man killed a woman with a machete and wounded two others outside a bus station in the southwestern city of Reutlingen before being arrested. Police said there were no indications pointing to terrorism and the attacker and the woman worked together in the same restaurant. Polish authorities said she was a Polish citizen.

And an ax attack on a train near Wuerzburg last Monday wounded five. A 17-year-old Afghan asylum-seeker was shot and killed by police as he fled the scene. ISIS claimed responsibility for the attack.

These attacks came shortly after a Tunisian man driving a truck killed 84 people when he plowed through a festive crowd celebrating Bastille Day in Nice, along the famed French Riviera.

In Munich on Sunday evening, 1,500 people gathered at the scene of the shooting there, lighting candles and placing flowers in tribute to the victims of an 18-year-old mall terrorist. Police said that he had planned the attack for a year.

Munich authorities said Monday at a news conference that a 16-year-old Afghan friend of the Munich attacker may have known of the attack in advance.

Police said Monday the teenager was arrested late Sunday and investigators were able to retrieve a deleted chat between him and the attacker on the messaging app WhatsApp.

Investigators say the two teenagers met last year as in-patients at a psychiatric ward. Both were being treated for online game addiction, among other things.