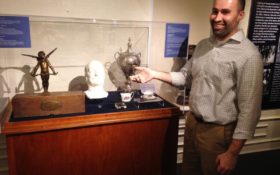 The U.S. Naval War College Museum has unveiled a new exhibit to teach people more about World War I.

It focuses on the Navy’s role in the war, using the career of Navy Adm. William S. Sims to tell the story. Sims commanded U.S. naval forces in Europe during the war, and his family donated artifacts.

The Rhode Island museum is displaying the exhibit for about three years.

Curator Rob Doane said people will be interested in the Navy’s role because many successful strategists in World War II learned how to coordinate complex operations and forge relationships with allies during World War I.

Sims went on to lead the war college. He changed the curriculum based on his experiences during the war and influenced a generation of naval leaders, Doane said.

“World War II gets a lot more attention,” he said. “Even within World War I, the Navy’s role is not that understood.”

Visits must be scheduled about a week beforehand so a background check can be done for entry to the Newport facility.

The exhibit opened this month. The family heirlooms include Sims’ death mask from 1936, swords, a ship model, family photos and gifts given to Sims in Europe to thank him for his service.

“This isn’t just another World War I exhibit,” said David Kohnen, director of the college’s John B. Hattendorf Center for Maritime Historical Research. “What you will see are things Adm. Sims himself kept for his family, and 100 years later, they’re now on display for the very first time outside of the Sims family. It offers a uniquely human perspective on a figure who really helped build the United States Navy of the 21st century.”

A three-star flag is on display that is believed to have flown over the base in Queenstown, Ireland, which is now Cobh, when Sims was in command. The British admiral in Queenstown went on leave for two weeks in 1917. That was the first time an American had ever held command over foreign naval forces, Doane said.

The Naval History and Heritage Command loaned artifacts for the exhibit. Retired Rear Adm. Samuel Cox, director of the command, said it’s a way to help people better understand the immense changes that occurred in the world because of the war.

Many of Sims’ early recommendations were controversial at the time, such as taking destroyers from the battle fleet and sending them to Europe to escort convoys, but in historic hindsight, were unerringly accurate and helped changed the course of the war, Cox added.