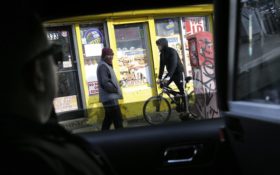 Even after two terror attacks and a driver’s deadly rampage through Times Square, New York City is on track to smash its modern-era low for homicides in a year.

Through Dec. 17, the city of 8.5 million people, once America’s murder capital, had recorded 278 killings. That puts it on pace to end this year with killings down 14 percent from last year, and well below the 333 in 2014, which was the year with the fewest homicides since the city began keeping accurate crime statistics in 1963.

Those numbers mean a person’s odds of getting killed by homicide in tightly packed, diverse New York City this year were about the same as they were last year in Wyoming, Montana and South Dakota.

Crime has been dropping for many years in New York, but 2017 saw substantial drops even in places like Brooklyn’s 75th Police Precinct, once among the nation’s most violent places.

“You can feel the change. More people are out walking the streets at night, they’re out talking to their neighbors, they’re not rushing their kids home, you know, with their heads down,” said Rashaud Carmichael, 36, a construction worker and father of three who lives in the area. “I’ve lived here all my life. And man, I can tell you, it’s a different world now.”

The statistics stand in sharp contrast to the picture of New York City painted by President Donald Trump on the campaign trail a year ago, when he said murders were up because the city’s liberal mayor was coddling immigrants living here illegally and abandoning a police tactic that involved stopping and frisking huge numbers of predominantly innocent black and Hispanic men.

“Look what’s been done in this city,” Police Commissioner James O’Neill said in an interview with The Associated Press. “These are real numbers. I don’t think that’s something that can be ignored.”

New York’s death toll was worsened this year by a Halloween attack by a man from Uzbekistan who drove a rented truck down a waterfront bicycle bath, killing eight people.

Months earlier, a driver, said by police to have smoked marijuana laced with PCP, mowed down pedestrians in Times Square, striking 21 people and killing one. No one died this month when a would-be suicide bomber detonated an explosive in the subway system.

Out in the 75th Precinct, residents are still more concerned about gangs and drug dealing than terrorism.

“Crime is still here for us. I still see it and I still feel it,” said Jessica Franco, 31, who started the Civic Association of Cypress Hills. “But I think neighbors have to also understand their power to help change this — and their responsibility to engage with police to help make it better.”

Some criminologists say a move away from heavy-handed policing may have helped drive crime lower.

For years, the police department tackled crime hotspots by flooding them with extra officers and arresting large numbers of people for mostly petty crimes. Violent crime did fall, but it kept falling as police shifted toward an approach of building community relationships and focusing more on serious crimes. Arrests are down about 7 percent this year.

Chief of Patrol Terence Monahan said there were other tactical changes. The department ditched specialized units within precincts and made most officers general assignment. It ordered more cars so officers with foot posts far from stations weren’t spending half their tours walking to their assignments. Officers are assigned to smaller areas. And it created neighborhood coordination officers, who spend time addressing concerns like cars blocking driveways.

“We’re not going to arrest our way out of the problems here,” said Sgt. Timothy Cecchini on a recent patrol through the 75th Precinct. “But now, we are getting the space to think about how to do our jobs and really address issues for people and talk to them.”

Over the course of one recent afternoon, he shook hands with a bouncer at a bar beneath an elevated subway line and checked on a jittery ex-convict who needed help with his sick dogs but was mistrustful of the police.

Some people at a public housing development waved to Cecchini as he drove by. Others gave him the finger.

Brooklyn resident Barry Riggins, 49, said he hasn’t seen a gentler side of the department yet. He said he has been arrested five or six times — but only once when he deserved it.

“I can honestly tell you, I’m your normal black man,” he said. “I’m more afraid of the cops than people in my area.”

Other big American cities have been having a mixed experience with violence in 2017.

Researchers who study crime patterns give the NYPD some credit but also attribute its success to other factors, such as a flood of wealthier people into the city and a high employment rate.

“Policing plays a part, there’s no question about that. But without the enormous demand and capital for expansion, I think it would be a different story,” said Richard Rosenfeld, a criminal justice professor at the University of Missouri St. Louis.