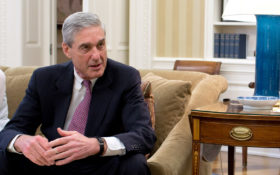 Special Counsel Robert Mueller has been largely silent since he brought the Russia investigation to an end.

Mueller delivered the report that largely exonerated President Donald Trump — and went back to work.

But this week he finally had enough of the fake news and anti-Trump spin. Mueller is finally speaking out about lies regarding his report.

Author Michael Wolff, who last year released “Fire and Fury,” is back in the spotlight again with his upcoming anti-Trump book, “Siege.” The Guardian obtained an early copy of the book and according to reports, Wolff claims to know that Mueller and his team drew up Trump on three counts of obstruction of justice but decided to toss the charges.

Sponsored: Video from Hillary’s past could land her in jail

According to Wolff’s sources, the so-called charges were as follows:

“The documents described do not exist,” said Peter Carr, a spokesman for Mueller told Fox News.

Reading between the lines here, Mueller isn’t wasting his breath.

And now that Mueller has spoken, his words have set a very important precedent among the chatter. There are no documents that suggested Trump was ever going to be charged.

Mueller went out of his way to defend Trump from the fake news. Wolff is lying… and the media is eating it up.

Mueller hasn’t testified, nor has he made any plans to — experts say he doesn’t want to be a put on display by lunatic Democrats.

He’s trying to get back to work.

But Mueller won’t be silent regarding the lies any longer.