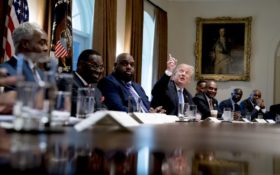 In negotiations over a possible interview by prosecutors, special counsel Robert Mueller’s team has offered the White House format changes, perhaps willing to limit some questions asked of President Donald Trump or accept some answers in writing, according to a person briefed on the proposal.

Talks between Trump’s lawyers and the special counsel investigating Russian interference in the 2016 election have restarted in recent days, and it is not clear a deal will be struck, according to the person, who spoke Thursday on the condition of anonymity to discuss private negotiations. Trump has publicly expressed a desire to be interviewed, but his lawyers have repeatedly objected to the investigators’ proposals.

Trump attorneys say both sides have exchanged proposals for conditions for such a Trump interview.

Trump as closely monitoring news coverage of his former campaign chairman, Paul Manafort, which provoked the spate of incendiary tweets, according to the two Republicans and two White House officials.

The president’s anger came the day after the start of the trial of Manafort, who is facing federal charges of bank fraud and tax evasion. And while Mueller did not bring any election-related charges against Manafort, the specter of the Russian investigation is hanging over the Alexandria, Virginia, courthouse. And Trump’s White House.

“Paul Manafort worked for Ronald Reagan, Bob Dole and many other highly prominent and respected political leaders,” Trump tweeted. “He worked for me for a very short time. Why didn’t government tell me that he was under investigation. These old charges have nothing to do with Collusion – a Hoax!”

Rudy Giuliani, the president’s lawyer, stressed that Trump was just issuing an opinion, though he also said the White House believes “the investigation should be brought to a close.”

“I guess, if we were playing poker — we’re not — put up or shut up, what do you got?” Giuliani said. “We have every reason to believe they don’t have anything.”