Mueller has narrowed the scope of questions for Trump, says lawyer - The Horn News 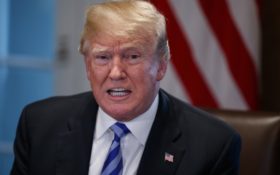 President Donald Trump’s attorney said Friday the special counsel in the Russia probe has narrowed the scope of potential questions for the president, even as Trump advanced an unverified theory that the Justice Department planted a spy in his 2016 campaign and is now “out to frame him.”

Rudy Giuliani said on CNN Friday that special counsel Robert Mueller has narrowed his question subject areas from five to two, as negotiations continue over whether the president will sit down for an interview.

Giuliani said they don’t expect to be asked about the president’s personal attorney, Michael Cohen, who faces a separate criminal investigation in New York. But Giuliani did not provide many additional details, saying that some of it is “subject to negotiation.”

His comments came after Trump sent out an early morning tweet that seemed intended to undercut the ongoing Russia investigation, which he has repeatedly called a “witch hunt.”

Promoting a theory that is circulating in conservative circles, Trump quoted Fox Business anchor David Asman and tweeted: “Apparently the DOJ put a Spy in the Trump Campaign. This has never been done before and by any means necessary, they are out to frame Donald Trump for crimes he didn’t commit.”

On whether there was an “informant” in the 2016 presidential campaign, Giuliani said on CNN, “’I don’t know for sure, nor does the President, if there really was one,” though he said they have long been told there was “some kind of infiltration.”

Last week, the National Review raised the question of a possible FBI spy on Trump’s campaign. The article cites work by Rep. Devin Nunes, an ardent Trump supporter and head of the House intelligence committee, who has demanded information on an FBI source in the Russia investigation.

The New York Times reported separately this week that at least one government informant met several times with Carter Page and George Papadopoulos, both former foreign policy advisers on Trump’s Republican campaign. The newspaper attributed the information to current and former FBI officials.

In a tweet Thursday, Trump cited the National Review article suggesting that the FBI source was really a “confidential informant in the campaign.”

“If so, this is bigger than Watergate!” he tweeted.