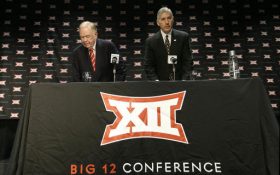 The smallest Power Five conference is not getting any larger. The Big 12 is staying at 10 schools.

After three months of analyzing, vetting and interviewing possible new members, Big 12 leaders on Monday took expansion off their agenda.

“This was not a decision to not expand,” Commissioner Bob Bowlsby said. “This was an endorsement and reinvestment in the 10 that we had.”

Oklahoma President David Boren said the decision was unanimous and no specific schools were discussed or voted on during five hours or so of expansion talk while Big 12 presidents and chancellors met Sunday night and Monday.

Boren, the chairman of the Big 12 board of directors and the only president who has been in the league since its inception in 1996, insisted he has never seen “such a unified sense of purpose on the board.”

Texas President Greg Fenves said 10 is the right number for the league.

“It promotes a competitive balance and allows for a round-robin schedule in the different sports, which is best for our student-athletes,” Fenves said. “This is the right way to ensure a strong conference moving forward.”

Conference officials held interviews in September with Air Force and Colorado State from the Mountain West; Central Florida, Cincinnati, Connecticut, Houston, South Florida, SMU and Tulane from the American Athletic Conference; Rice from Conference USA; and BYU, which is a football independent with its other sports in the West Coast Conference.

Moving into a Power Five conference for those schools would mean tens of millions of dollars more revenue per year, along with greater exposure and prestige.

Houston athletic director Hunter Yurachek said the Big 12’s decision “is not just about the University of Houston and the Big 12 Conference, it’s about the evolving landscape of collegiate athletics. It does not, and will not, deter our mission of building champions for life.”

UConn President Susan Herbst said going through the process was a positive experience and it gave her a better understanding of where UConn stands and what it has to offer.

“Most of the schools they were talking to were in our conference,” she said. “I think that shows, without question, that our conference plays at their level and are athletically and academically appropriate to be a Power Five.”

Boren once called the Big 12 “psychologically disadvantaged” as the smallest Power Five league and the only one without a football championship game.

“The circumstances have radically changed,” Boren explained Monday when asked about the comment he first made in June 2015.

And the Big 12 announced earlier this year it was bringing back its football championship game in 2017, no matter its composition.

Knowing now there will be 10 teams, Big 12 athletic directors can move forward with the process of determining if the league will split into divisions and how to determine which teams will play in the championship game.

Oklahoma athletic director Joe Castiglione, part of a subcommittee addressing those issues, said that decision could be made by November. As for the site of the title game, he said the league got bids from four potential hosts.

While never committing to expansion, the Big 12 has been tossing around the idea for almost two years as it tries to find ways to increase revenue and improve the conference’s chances to make the College Football Playoff. The Big 12 was left out of the first playoff in 2014, but conference champion Oklahoma made it last season.

Boren and Bowlsby both said that expansion could be re-addressed in the future, but said it no longer is an active agenda item.

In June, the conference announced record payouts to members of $30 million each, and expansion talk seemed to fade.

A month later, at their last board meeting, school presidents were briefed by consultants who explained how the conference could bolster its playoff chances by adding schools and boost revenue.

Two new members would have meant an extra $50 million in TV revenue per year for the Big 12 on contracts with ESPN and Fox that run through 2025.

The networks have not been keen on the idea of paying the Big 12 to add schools. When asked if the league would be getting more money from ESPN and FOX for not expanding, Bowlsby wouldn’t get into specifics about negotiations.

“We have a new piece of inventory with our championship game, so we’re in the process of discussions with both FOX and ESPN on that,” Bowlsby said. “There are components of the contract that we also talk about in the context of those changes, and we’re going to continue to talk about those.”