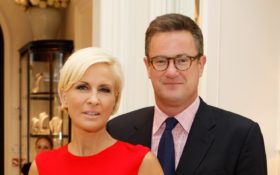 The “Morning Joe” host has rambled on for more than a year now about supposed secret health problems facing the president along with other bizarre accusations.

Yet when it comes to himself and his own ugly past, Scarborough has a different standard.

He was LIVID when the president mocked him by referring to a conspiracy theory from his own past: the 2001 death of an intern at his Florida office when he was a serving in the House of Representatives.

“So now that Matt Lauer is gone when will the Fake News practitioners at NBC be terminating the contract of Phil Griffin?” Trump tweeted. “And will they terminate low ratings Joe Scarborough based on the ‘unsolved mystery’ that took place in Florida years ago? Investigate!”

So now that Matt Lauer is gone when will the Fake News practitioners at NBC be terminating the contract of Phil Griffin? And will they terminate low ratings Joe Scarborough based on the “unsolved mystery” that took place in Florida years ago? Investigate!

Harsh words, but Scarborough didn’t “man up” and defend himself from the president’s tweet.

He hid behind his fiancée, cohost Mika Brzezinski.

“Today the president crossed another deeply disturbing line with his attack on Joe. The chief law enforcement officer of the United States of America advanced a false conspiracy theory to intimidate the press and cause a chilling effect on the First Amendment,” she said on the air on Thursday morning. “Joe and I are not intimidated. His bizarre behavior contravenes both the Constitution and basic moral judgment.”

By all accounts, there’s zero evidence to back the wild and bizarre theories online about the death of 28-year-old Lori Klausutis, who had a history of serious health problems.

She had been in a coma as a teen and emerged with memory loss, and battled an abnormal heart rhythm that caused her to lose consciousness in his office, fall, and suffer the fatal head injury.

So why did Trump dredge it up?

No doubt because he was sick to death of Scarborough and Brzezinski repeating every bizarre claim about the president uncovered from the murky depths of the Internet’s extreme leftist elements.

He’s said repeatedly that Trump has dementia, a favorite wild claim of the far fringes of the extreme left, despite zero evidence to the contrary.

It’s such a bizarre and incredulous claim – and so unlikely – that no one in the mainstream media will touch it.

No one, that is, except Scarborough!

Yet in their on-air attack on Trump on Thursday, the pair claimed they were taking the high road.

“We’re going to focus on more pressing issues like the nuclear conflict with North Korea,” Brzezinski claimed. “We hope the president will do the same.”

It was a promise not kept.

During the same show, Scarborough once again claimed that Trump had dementia and called on the Cabinet to invoke the 25th Amendment to depose of a democratically elected president.

So much for focusing “more pressing issues.”