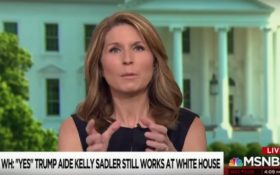 MSNBC is an organization known for their liberal narrative with extreme exaggerations, and their nonstop attacks on the White House have been ratings gold for the cable news network since President Donald Trump’s election.

This time, though, daytime host Nicole Wallace went way too far when she insinuated she wanted to choke White House Press Secretary Sarah Huckabee Sanders because she did not agree with Sander’s opinion.

During a White House briefing, Sanders was asked why that aide was not yet fired and Sanders explained that she did “not want to comment on an internal staff meeting.”

That response was not good enough for Wallace, who said she wanted to strangle Sanders for not giving a better answer.

“How do you resist the temptation to run up and wring her neck? Why can’t she just say, ‘If a staffer said that, we’re going to get to the bottom of it and she’ll be fired?’” Wallace asked NBC White House reporter Kristen Welker. You can watch the disturbing clip here —

On Twitter Friday, Wallace gave a halfhearted apology for her “poorly chosen words.”

When I asked about whether the tension in the briefing room ever makes reporters want to wring the neck of the spokesman, I used poorly chosen words, & for that I’m sorry. I was trying to imagine the exasperation of getting spin & not answers re: John Mccain being “about to die”

But in the same hour that Wallace stated she wanted to choke Sanders, MSNBC analyst John Heilemann said he would sooner kill himself than sit in Sanders’ press briefings.

“I could not go down there and do what Kristen Welker did today. I could not. I would slit my throat after about maybe two of those briefings if I had to sit in that room every day,” he said.

Listen a conservative white woman discuss a different opinion than his own? MSNBC analysts would sooner die.

MSNBC has yet again taken the liberal narrative to the next level, and these hosts deserve to be fired.