MSNBC star has on-air FREAK OUT! (she was totally caught off-guard) - The Horn News 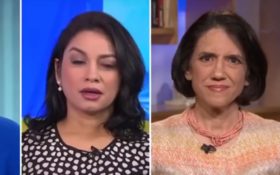 MSNBC star Joy Reid freaked out live on-air Sunday when a conservative guest revealed disturbing details on former Secretary of State Hillary Clinton — and she cut off the mic rather than face the disturbing truth.

Hamill’s response caused everyone to freak out.

“We didn’t actually hear the president say those words,” Hamill said. “When I read [Trump’s comments], yeah… this is the biggest fake news story of the week. And it’s interesting to sit back and watch people are so angry over what that the president didn’t say… they’re more angry than they are at the Clinton’s for getting rich off the poor Haitians. You can ask all of the Haitian-Americans that have been protesting against the Clintons and the Clinton Foundation for years.”

“You can ask Klaus Eberwein, the former Haitian government official that has all the dirt on the Clinton Foundation… oh, wait, you actually can’t ask him because he mysteriously committed suicide the day he was supposed to testify!” Hamill said.

The mention of the mysterious deaths that have surrounded the Clinton Foundation for years caused the other panelists to react with visible anger.

“What are you talking about!?” Washington Post columnist Jennifer Rubin exclaimed. “This is nuts!”

Reid jumped in and demanded to know if Hamill had received talking points from the White House. “Joy, I didn’t get any talking points,” Hamill replied.

“I don’t know you, Stephanie, but let me explain this to you: this is not Fox News and we are not going to play the game of rolling out crazy conspiracy theories to answers to my questions,” Reid said. “So I am going to put you pause for the minute, I’m going to put you to the side and go to my other guests because they are more familiar with the way that we do things here.”

Reid then cut Hamill’s mic and went back to the safety and comfort of her left-leaning echo chamber, where her fellow panelists resumed calling Trump racist and mean.

But the damage was done. For one brief moment, the mainstream media released a breath of fresh air for the handful of viewers they have left.