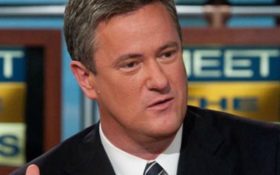 On the 17th anniversary of the Sept. 11, 2001 attacks, many Americans are remembering the lives of nearly 3,000 people killed in the radical Islamic terrorist attacks.

Joe Scarborough, host of “Morning Joe” on MSNBC, spent the morning disrespecting the family and friends mourning the loss of their loved ones.

On Monday evening, Scarborough tweeted out a link to a column he wrote for The Washington Post with the caption, “Trump is damaging the dream of America more than any terrorist attack ever could,” and many Americans slammed the MSNBC host for the nasty insult.

Scarborough is a former Republican congressman who deregistered from his party after Trump was elected president. Since the 2016 election, he’s become a face of the so-called media “resistance.”

Scarborough then went on to add his attacks against Trump, saying, “Sixteen years of strategic missteps have been followed by the maniacal moves of a man who has savaged America’s vital alliances, provided comfort to hostile foreign powers, attacked our intelligence and military communities, and lent a sympathetic ear to neo-Nazis and white supremacists across the globe.”

“For those of us still believing that Islamic extremists hate America because of the freedoms we guarantee to all people, the gravest threat Trump poses to our national security is the damage done daily to America’s image,” the MSNBC host wrote.

Scarborough concluded his column saying, “The question for voters this fall is whether their country will move beyond this troubled chapter in history or whether they will continue supporting a politician who has done more damage to the dream of America than any foreign adversary ever could.”

The MSNBC host implied that voters need to make their voices heard this fall — despite the fact that millions of Americans did voice their opinions a year and a half ago at the 2016 presidential election.

His two predecessors, Bush and Obama, are the faces behind the deficit, the wars, and the globalist ideas that led to Americans voting Trump into office to fix their mess.

Using the anniversary of the worst terrorist attack to ever happen on U.S. soil as a promotion of Scarborough’s latest attack on the president is a new low.

The president’s son, Donald Trump Jr. wrote to Scarborough on Twitter, demanding an apology for the victims of Sept. 11.

“Joe you owe an apology to the 3000+ families who lost loved ones on this tragic day. Injecting politics today is disgraceful and only shows how irrelevant and deranged you’ve become,” he wrote.

Joe you owe an apology to the 3000+ families who lost loved ones on this tragic day. Injecting politics today is disgraceful and only shows how irrelevant and deranged you’ve become. https://t.co/tFncxA5CQT

The president marked the 9/11 anniversary a ceremony in Pennsylvania, and Scarborough spent his day doing damage control over his disgraceful comments.

Do you think that Joe Scarborough owes 9/11 victims and their families an apology? Share your opinions below —

Do you think Joe Scarborough owes an apology to 9/11 victims?