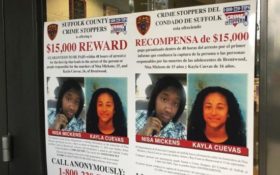 Accused of the brutal murder of two teenage American girls, three alleged members of the brutal Salvadorian gang MS-13 don’t seem to have a care in the world. Sitting inside a New York courtroom on Tuesday, the trio laughed with each other while the family of one of their alleged victims looked on.

“Enrique Portillo, Alexi Saenz and Jairo Saenz laughed and grinned amongst themselves, their shackles clanking, as prosecutors said they’d yet to hear if the Justice Department will allow them to seek the death penalty for the murder of best friends Nisa Mickens and Kayla Cuevas in Brentwood in 2016,” according to The New York Post.

Walking home in a residential neighborhood on Sep. 13, 2016 — one day before Mickens turned 16 — the trio were ambushed by the three MS-13 gang members, authorities say.

The innocent young girls were allegedly brutally beaten with baseball bats and hacked to pieces with machetes by the three men.

“We shouldn’t be tolerating this type of behavior, at all whatsoever. These are kids [getting murdered by MS-13]. Kids! This should not be tolerated at all,” Cuevas’ mother Evelyn Rodriguez told “Fox and Friends” last July.

At the State of the Union address, President Donald Trump stressed the importance of cracking down on the brutal gang — which brings members in illegally across America’s southern border.

Since May, under Trump’s direction, agents have been cracking down on the violent gangs terrorizing the working-class suburbs of Long Island. Total, federal agents have swept up 428 gang suspects, including 220 members of the notorious MS-13.

But the sweep, Operation Matador, also has been shrouded in secrecy. Federal and state authorities have declined repeated requests from the media for even basic information made public in most law enforcement operations, such as the names of those arrested and the crimes they are accused of committing.

They won’t divulge their ages, immigration statuses or current whereabouts. And while they say 44 of those arrested have been deported, they refuse to say what happened to the rest, including whether they are even still in custody. They say releasing more details could endanger the suspects and jeopardize ongoing investigations.

MS-13, also known as La Mara Salvatrucha, recruits young teenagers from El Salvador and Honduras and smuggles many into the United States illegally, though some gang members were born in the U.S.

The gang has been blamed for at least 25 killings since January 2016 across a wide swath of Long Island. Many other people are missing.

In a July visit to Suffolk County, New York, Trump promised his administration would “dismantle, decimate and eradicate” MS-13.