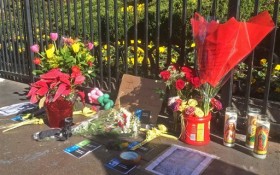 Clark County District Attorney Steve Wolfson says additional charges are likely, depending on results of drug and alcohol tests and the police investigation, for the woman accused of intentionally plowing a car into dozens of pedestrians this week.

Lakeisha Nicole Holloway, who is accused of slamming her vehicle through crowds of pedestrians on a Las Vegas Strip sidewalk has been arraigned on murder, hit-and-run and child abuse charges stood in shackles Wednesday.

Holloway didn’t enter a plea during her brief court appearance.

She barely spoke and nodded to acknowledge that she understood she’ll remain in jail through the holidays while both sides investigate the crash Sunday that killed a woman and injured dozens of people.

The judge set a Jan. 20 date for a preliminary hearing of the evidence.