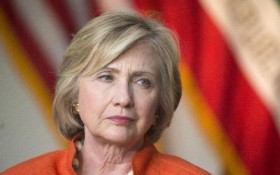 Following a massive victory in the South Carolina primary on Saturday, former Secretary of State Hillary Clinton’s presidential campaign is leading in the polls and seems eager to lock up the Democratic nomination on Super Tuesday tomorrow.

But there’s one ghost in her past that could still come back to haunt her — Clinton’s longstanding email scandal is set to make more headlines today, just hours before the all-important Tuesday elections.

The State Department has a deadline of today, Feb. 29, to release thousands of emails from Clinton’s private server she used during her time as secretary of state.

These could be the final emails to be released from the State Department, and at least some of them were reportedly held back because they contained highly sensitive information.

At best, the release today will prove another embarrassment for Clinton — at worst, it could add more fuel to the narrative that she cannot be trusted to properly handle national secrets.

Considering how many millions of undecided voters make up their minds in the 24 hours before casting their ballots, any damning information from these remaining Clinton emails comes at the worst possible time for her campaign.

Despite this, Clinton tried to turn the page on Sunday. The morning after gleeful staffers celebrated her sweeping victory in South Carolina, Clinton intensified her focus on the race beyond the Democratic party conventions and aiming her attacks at Republican frontrunner Donald Trump.

“There’s going to be a very, very significant difference between someone like me and what I want to get done for our country and any one of the Republican potential nominees. The stakes could not be higher,” Clinton told a small group gathered in Pine Bluffs, Arkansas Sunday night.

“America has never stopped being great, our task is to make America whole,” said Clinton at Greater Imani Cathedral of Faith, prompting a chorus of amens from the crowd.

Less than forty-eight hours before the Super Tuesday voting contests, Clinton and her team are growing increasingly confident that they are on track to capture their party’s nomination.

Allies of the former secretary of state, unaffiliated Democratic strategists and the national party are stockpiling potential ammunition about Trump, reviewing reams of court filings, requesting information about his business dealings from state governments and conducting new polls to test lines of attack.

It goes both ways, with Trump indicating Sunday that Clinton is already on his radar. Speaking at a rally in Madison, Alabama, Trump said voters should focus on the controversy surrounding Clinton’s use of a private email server while secretary of state if he’s the nominee.

“I guarantee you one thing: We’re going to be talking about those emails every moment of every day,” he told the crowd.