Mom who killed toddler gets off scot-free - The Horn News 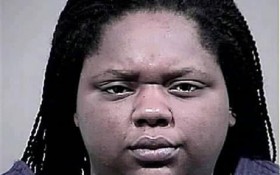 The 25-year-old Maryland woman who was discovered pushing her dead three-year-old son in a playground swing last year after leaving him there for 40 hours will avoid any time in prison or a mental institution under a plea deal accepted Monday.

Under a five-year conditional release order, Romechia Simms must take her medication, see a psychiatrist and meet other various conditions set by a court monitor. Public defender Elizabeth Connell called the agreement to allow Simms to remain free in the community a “progressive way of thinking” and a “testament to the progress of science and society.”

But not everyone sees it that way.

Simms, who suffers from schizophrenia, had been skipping her medication at the time of the boy’s death. And the court order now basically trusts Simms to take her medication regularly.

The fact that Simms decided not to take her medicine — combined with the heinous nature of her crime — had led to calls that she be held responsible, even if it meant confinement in a mental hospital.

Simms had faced up to 45 years in prison if convicted of the original charges. The involuntary manslaughter charge carried a possible prison sentence of up to 10 years.

During the case, the prosecutor detailed some of the gruesome evidence against Simms. According to The Washington Post, the prosecutor described to the court how the toddler’s body was taken from the playground to the medical examiner’s office still in the swing because his body was too stiff to remove, causing a sheriffs deputy to become emotional and audience in the court to audibly gasp.

“Did I mean for any of this to happen? No. It’s just an unfortunate situation,” Simms said of her toddler’s death.

State’s Attorney Tony Covington stressed that he was not happy with the outcome, but did not have enough evidence to refute three psychologists’ findings that she was not criminally responsible.

According to a 14-page report obtained by The Washington Post, psychologist Teresa Grant of the Maryland Office of Forensic Services wrote that although Simms is competent to stand trial, her mental disorder caused her to “lack substantial capacity to appreciate the criminality of her conduct or to conform her behavior to meet the requirements of the law.”

Simms was released from custody in December after her family posted bail. She has been living with her mother and teenage brother.

“As a direct result of her not taking her medicine two days leading up to this episode, [her son] is dead,” Covington said. “Essentially, and I can’t think of any other word to use for it your honor, tortured to death.”

As part of the deal, a Charles County judge found Simms not criminally responsible, multiple media outlets reported. Before her trial began on charges of manslaughter, first-degree child abuse and child neglect resulting in death, Simms entered an Alford plea to a lesser charge of involuntary manslaughter. That means she acknowledged that prosecutors had enough evidence to convict, without admitting guilt.