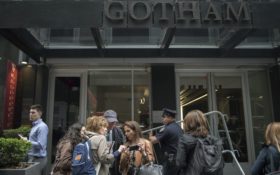 Law enforcement officials say a former Playboy centerfold model who was involved in a custody battle apparently jumped with her 7-year-old son from a hotel in midtown Manhattan and both died.

According to law enforcement officials, the pair checked into the penthouse suite of the Gotham Hotel on the 25th floor the night before. They were found on a second-floor balcony at about 8:15 a.m. Friday by workers, who called police. Officials identified the woman as Stephanie Adams and her son as Vincent. The officials weren’t authorized to speak publicly and spoke to The Associated Press on condition of anonymity.

Hotel staff said they had no information. The investigation is ongoing.

The Gotham Hotel is located on 46th street, about four blocks from Grand Central Terminal.