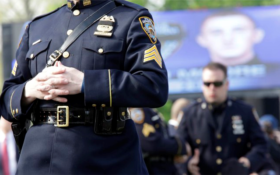 Authorities are searching for a person of interest in the fatal shooting of a western Missouri police officer during a traffic stop, the Missouri State Highway Patrol said Monday.

The vehicle stopped was registered to Ian McCarthy, 39, of Clinton and he is considered a person of interest in the killing, Lowe said.

After Michael made the traffic stop and got out of his patrol car, the driver got out of his car and fired at the officer, who was able to return fire, Lowe said. The man drove away but crashed and fled on foot. It was not clear if the driver was shot or injured in the crash.

Officers searched a house Monday morning where McCarthy was thought to be, but he was not there. Lowe said authorities believe he is still on foot somewhere in the Clinton area.

Michael was a lifelong resident of Clinton and leaves behind a wife and stepsons.